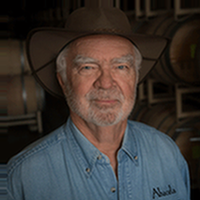 Earl Jones is a big man with bright blue eyes and work-worn hands. His voice, after 25 years in Oregon, still carries traces of the southern lilt he picked up during years in Kentucky, Georgia, Alabama and Louisiana. As a boy, he drove a tractor between rows of corn, wheat and soybeans on his parents' farm in Kentucky, but his passion was science. When he left home to attend Tulane University in New Orleans he never wanted to grow anything again. Instead, he turned his keen analytical mind to medical science.

While at college, a chance encounter with a bottle of Pouilley-Fuissé introduced Earl to fine wine. Back home on the farm drinking was limited to the occasional dram of whisky at Christmas. Now he realized there was a whole world of culture, history and sensory delight to be found in wine. After earning his MD, Earl pursued a career as an immunology researcher. While teaching at Emory University in Atlanta he met Hilda. They married after a year-long courtship and together explored the world of wine – especially the Rioja wines that paired beautifully with their favorite foods.

Ever the researcher, Earl accumulated a wine collection and winemaking lore. When he decided to leave the medical field it was natural for him to consider a career in wine, though it meant moving his family across the country and embarking on a project with no guarantee of success.