Looking for an “Outdoor Laboratory” 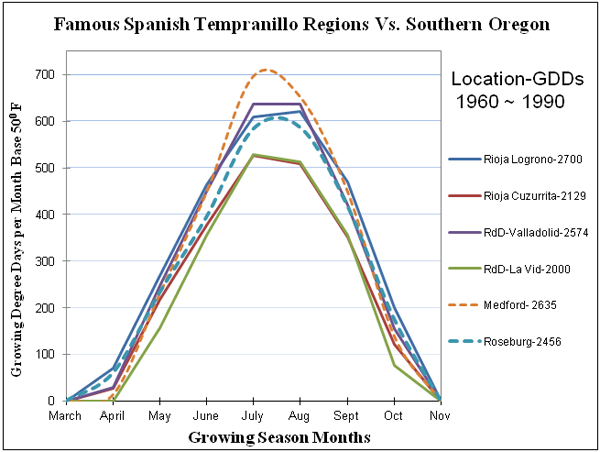 The graph shows that both Roseburg and Medford share climates that mirror the growing season climes of Rioja and the Ribera Del Duero. The graph plots the amount of solar heat received at airport weather stations for two sites in Rioja, using Logrono as the warmest location and Cuzurrita Rio Tiron one of its coolest sites. The heat is expressed as Growing Degree Days (GDD) which is the average temperature of each day in degrees above 50 degrees summed for a month. Similar data for Ribera shows the warm extreme of Valladolid and the cooler area of La Vid. The airport weather stations in Medford and Roseburg showed very similar numbers and plots almost identical curves for the vine's growing season. In addition, the mid-summer rainfall in both Southern Oregon cities was less than in Rioja and Ribera while the full 7 month growing season data was very similar. This was a Eureka Moment!
Southern Oregon’s mountainous topography and prevailing oceanic winds coming over mountains of different heights meant the regional climate varied from one valley to another. This meant to find the best location the Joneses had to systematically search the entire climatic region from northern Douglas County to the California border. They ended up choosing the southern portion of the Umpqua Valley for three reasons.
1. Its meso-climate is an excellent homoclime to Spain's Rioja and Ribera del Duero regions.
2. Roseburg weather records from 1883 revealed the Umpqua basin to have the warmest winters in Southern Oregon which minimized the hypothetical risk of deep winter freezes killing Tempranillo vines.
3. The records also showed the Umpqua to have the lowest risk of spring and autumn frost in Southern Oregon which minimized the chance of crop loss.
With focus on the Umpqua, the Jones’s discovered private weather stations owned by timber growers, orchards and other farms that were willing to share data. This data triangulated to a 20 square mile area south of Roseburg and the question became which piece of terra firma should they purchase?
Topographical maps suggested several potential locations; at that juncture Earl hired an experienced Roseburg bush pilot to fly him over this area to point out the sunniest locations. As the plane crisscrossed the 20 square miles, Earl perched in the co-pilot's seat, listened to the pilot, observed the terrain and highlighted the most promising locations on 7.5-minute topo maps. Back on the ground, Earl drove through the rolling hills and valleys for a first-hand view of the highlighted terrain.
To their delight, they found land for sale that met all their criteria – including available water for irrigation and, the bonus of access to the domestic water supply of Winston Oregon. Soon they were in negotiations with the landowner to purchase an ideal 50-acre plot and in the autumn of 1992 became the proud owners of 463 acres of unspoiled oak savannah. It was more land than they needed but the price was right. “The Outdoor Laboratory” had been found. Upon tasting wines from Umpqua’s half dozen wineries, the Joneses were pleased to learn that what they considered to be the best red wine was sourced from a vineyard about a mile from their new property on Lookingglass Road.
The Joneses established three weather stations in their new “The Outdoor Laboratory” and early data begin to confirm the frost-free interval to be  approximately 200 days. The weather stations were at sites with different topographies and the early weather data suggested they might have more than one meso-climate to work with. 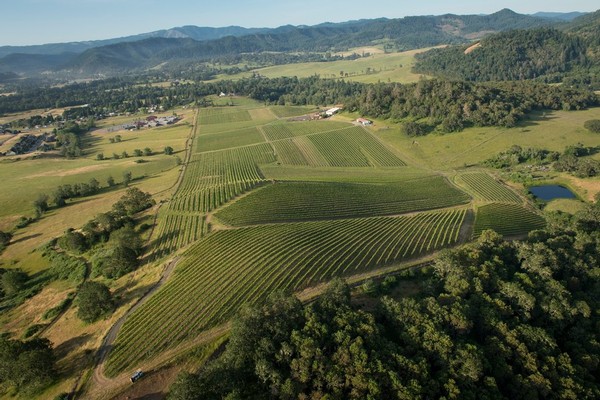 It now seems appropriate to jump forward in time to include a more complete story of the regional climate, sub-regional meso-climates and the micro-climates of Abacela as well.
The airport weather data plotted in the graphs from the 1961-1990 norms can be compared to similar data from 1981-2010 norms (30-year averages). The airport weather station in Medford when calculated as GDDs averaged 2,970 while Roseburg’s GDD numbers calculated to be 2,713. From this one can see a significant warming trend of roughly 300 heat units for each station. That is a 1.4 degrees Fahrenheit difference per growing season day which is a rough estimate of the region’s climate warming trend. Interestingly, Abacela’s weather station which is located on steep south facing hillsides recorded GDDs that were approximately equivalent to the Roseburg Airport station.
The Medford station’s precipitation data average is 18.5 inches per year with only 5.7 of that falling during the growing season. Roseburg receives 33.7 inches a year with 9.8 inches falling during the growing season.
Given the importance of actual vineyard temperature data, Greg Jones proposed in 2003 and the Oregon Wine Advisory Board (OWAB) funded his 29 vineyard Rogue and Umpqua climate study. The data from that ongoing study is summarized below. 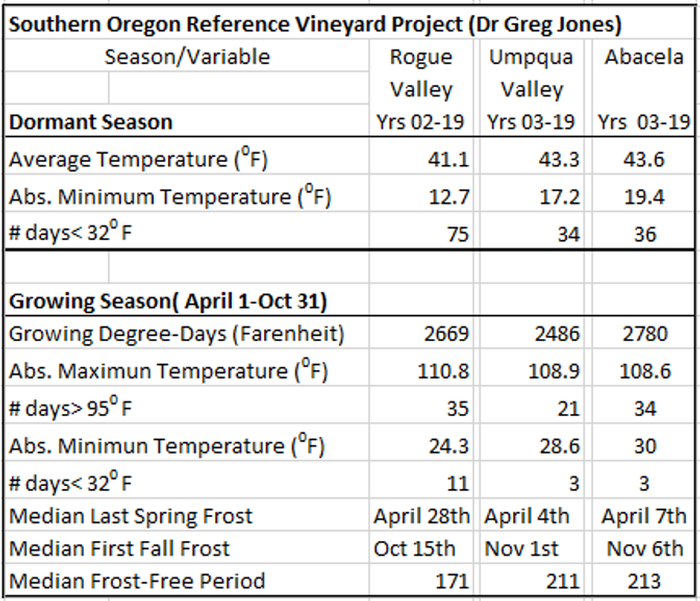 The table compares the average climate of a group of vineyards in both the Rogue and Umpqua Valleys to that of a single location in Abacela’s Fault line Vineyards.
Our original climate analysis now supported by years of data shows Abacela’s site climate(s) to be excellent matches for the Rioja and Ribera Del Duero as plotted above. Snow is rare and deep winter freezes have not occurred. Abacela enjoys a 213-day growing season and optimally hot summers. The onsite weather station also collects precipitation data which averages 28 inches per year with the growing season’s share of 8.1 inches, 18% less than Roseburg. The difference, which was not predicted is thought to be explained by mountains to the southwest that cast a rain shadow that splits the incoming rain around Abacela’s location.
Although not shown here, the range of meso-climates within Abacela’s Fault Line Vineyards are in essence a microcosms of the Southern Oregon region. This excellent “Outdoor Laboratory” and the publication by John Gladstone in 1992 of his book “Viticulture and the Environment” gave the Joneses further insight to climate matching and motivation to begin what became Abacela’s 25-year, 25 variety site trial.
Menu