Weather and Climate Summary and Forecast

​*Note that all references to normal or averages in this report are to the 1981-2010 climate normal for each weather/climate parameter unless stated otherwise. Also, note that the 1991-2020 climate normals are starting to become available across reporting agencies and will be used in this report when possible.

Past Month and Year to Date:
A record-breaking cold Artic outbreak dominated much of the country in the second half of December. For the western US temperatures ended the month near average to below average with the coldest areas being the inland PNW and the Great Plains (3-10°F below, Figure 1). Temperatures were closer to average in central to southern California and warmer than average in the southwest. The second half of the month brought a change in flow off the Pacific and some much-needed precipitation for the west, especially California. A wetter-than-average month (110-250%) was experienced from central California northeast through portions of the Great Basin, northern Rockies, and into the Plains while the southwest remained quite dry and the PNW was near average to slightly above average. The eastern US ended up near average to colder than average, except Texas across the Gulf states and across northern New England which were warmer than average (not shown). In terms of precipitation, the rest of the country was mixed with much wetter than average conditions in the Plains, western Great Lakes, and New England, and drier than average conditions for most of Texas and the eastern Great Lakes and southeast (not shown).

Preliminary data for the full calendar year for the western US has temperatures mostly above average (Figure 2). Coastal zones and scattered isolated areas were closer to average, while eastern Washington, the Snake River Valley, and portions of the Rockies were colder than average. Once the preliminary data is finalized, we will likely see the western US close to 2.5°F above average, with California and the desert southwest leading the way. 2022 will likely be a top 10 warmest year on record for the west, top 15 warmest for the US, and top 5 warmest for the globe. Maximum temperatures saw a greater deviation from average compared to minimum temperatures in 2022 over the western US (3.0 vs. 2.3°F for January through November). Most of the rest of the country also ended up warmer than average, except the northern Plains, western Great Lakes, and the northern Mississippi River valley which were cooler than average for the year (not shown). Even with the December inputs, precipitation amounts for the calendar year show that the western US was quite dry with most regions seeing between 30-90% of normal (Figure 2), with much of California and the Great Basin seeing the driest conditions. The inland PNW saw a near-average to wetter-than-average year, while Oregon was mostly below average. The desert southwest had a significant monsoon season putting many areas above average for the first time in a while. While current and projected drought concerns in the west continue for many areas (see Drought section below), the first half of winter has provided some relief. For the rest of the country, a dry 2022 was experienced from the central Plains south throughout Texas and portions of the Great Lakes while the northern Plains, southeast, Florida, and New England will end with a wetter-than-average year (not shown).

Drought Watch – While the December precipitation helped with drought concerns for many, there is still a significant portion of the country experiencing some level of drought (Figure 3). Currently, nearly 75% of the continental US is in some level of drought with nearly 30% of the country remaining in severe, extreme, or exceptional drought conditions. There continue to be some slight improvements from the start of fall, but also some continued drought developments. For the western US, drought conditions continue holding to near record area coverage with the overall drought footprint remaining over 90%. Fortunately, the most extreme categories of drought (extreme and exceptional) have dropped even further and are now under 15%. Washington has over 85% of the state in some level of drought, but still has no areas in the state in the most extreme drought categories. Oregon remains at over 90% of the state in some level of drought with the eastern and southern portions of the state remaining in extreme categories (>25%). California continues to have 100% of the state in some level of drought with the most extreme drought conditions decreasing slightly to just over 35% during the last 30 days. Drought levels have also worsened over much of the Great Basin of Nevada and Utah. The seasonal drought outlook for the second half of winter (Figure 3, right panel) continues to exhibit some potentially good news but continues to show both short and long-term drought issues for significant areas of the west. The wet winter forecast for the PNW and across the northern Rockies and Plains (see forecasts below) has the outlook lowering the severity or removing drought altogether in the region. Areas of Arizona and New Mexico which had seen some relief from an active monsoon season, are now forecast to likely see drought development again over the next few months (Figure 3 and see forecast section below). The central to southern Plains are forecast to see drought persist during this period while portions of the southeast are forecast to see drought develop, however, the Ohio and Mississippi river valleys are forecast to see some drought improvement or removal during this period.

ENSO Watch – While changes in the tropical Pacific are anticipated, the ocean basin continues in a La Niña state with SSTs in the central-eastern equatorial Pacific remaining below average (Figure 4). Other key oceanic and atmospheric variables in the region are also consistent with La Niña conditions. As such the Climate Prediction Center (CPC) is continuing the La Niña Advisory. Modeling efforts also continue to predict SSTs remaining below average during winter, and then returning to ENSO-neutral levels during spring or early summer. The official outlook from numerous agencies confirms this forecast with the outlook calling for La Niña to continue with moderate probability during January through March and decreasing further thereafter. While the current onslaught of precipitation in California is not indicative of typical La Niña conditions, the current patterns (see forecast periods below) are more the result of amplified circulation created from the extreme Arctic blocking event that ushered in the extreme cold of mid to late December. As such, La Niña is still contributing to the model forecasts pointing to the PNW likely seeing a cooler/wetter second half of winter, while California has higher odds to be drier during the next few months and near average for temperatures (see the 90-day forecast below). El Niño appears to be gaining more model and forecast favor in the late summer and fall of 2023. 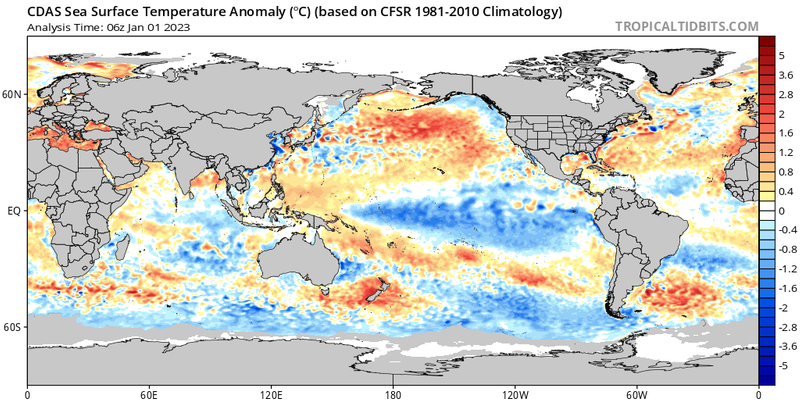 North Pacific Watch – The overall pattern in North Pacific SSTs continues to exhibit broad warmer than normal conditions over much of the central to western ocean basin (Figure 4). Likewise, the near-shore areas of the Gulf of Alaska and southward along the coast to Baja California have remained spatially consistent over the last month with cooler-than-average SSTs due to circulation over the region helping to mix cooler waters to the surface. Cooler SSTs also continue southwest from California and across the ENSO zone showing a classic La Niña pattern in tropical SSTs (see above). The overall pattern continues a strong negative phase in the Pacific Decadal Oscillation, where it has been for many months now. This type of pattern in cooler North Pacific SSTs supports the seasonal forecast showing the tendency for a cooler/wetter PNW, transitioning to cool and near average precipitation in northern California and to slightly cool and dry overall during the winter in most of the rest of California.

Next 5 Days: Favorable jet stream pattern for typical on-and-off storms coming in from the Pacific. Rain is likely for most of the west coast over the next few days and into the next forecast period (below) with the potential for some very large amounts even into California where flooding concerns will be. Mild to seasonal temperatures over the next few days for the western US as well.

6-10 Day (valid January 7-11): Zonal jet stream flow will likely bring plenty of rain and snow to the western US with the bullseye being California. Temperatures are expected to be seasonally mild due to predominately southwest flow, although areas of southern California and the southwest will likely be cooler than average due to cloud cover and rain. After a frigid December, the eastern US is forecast for substantially warmer than average temperatures producing the ‘big melt’. Precipitation is forecast to be below average in the Great Plains and New England with above-average amounts likely for Texas to the east coast of the US.

8-14 Day (valid January 9-15): Continued flow off the Pacific will bring off and on-again rain and snow through mid-month for most of the west with some hefty totals likely for many locations in the west. Temperatures are expected to be mild from the Bay Area north into the PNW while remaining near normal to below normal in central to southern California, the southwest, and into the Great Basin and Rockies. The eastern US is likely to continue its rebound to much warmer than average temperatures into mid-month. Much of the country is likely to see near-average to above-average precipitation during this period.

30 Day (valid January 1-31): The January forecast (Figure 5) reflects the big flip from the expected south warm and dry and north cool and wet that occurred with the short-term tropical forcing and Arctic blocking event that brought frigid air across the US and welcomed precipitation to the west, especially California. The result is that much of the west will have equal chances of above to below-average temperatures with California and Nevada likely to see the coolest temperatures (Figure 5). The rest of the US is forecast to see a warmer-than-average January, quite a flip from the frigid temperatures of December. The zonal flow of moisture (a train of atmospheric river events) will bring above-average January precipitation to most of the west with the core area of highest amounts from California to the northeast across the Rockies. Portions of the Great Lakes and Ohio River valley are forecast to see above-average precipitation, while the rest of the east has equal chances of being slightly drier to slightly wetter than average (Figure 5).

90 Day (valid January-February-March): Even with the unexpected change from a La Niña-like pattern in the early part of the winter, to a more El Niño-like pattern in December, the seasonal forecasts for the second half of winter are holding to a more typical La Niña pattern (Figure 5). Cooler and wetter than average conditions are forecast across the northern tier of states while the southern tier of states is forecast for warmer and drier conditions. In between, the middle of the country has equal chances for above-average, normal, or below-average temperatures and precipitation during this period. The anticipated move from La Niña to neutral conditions might alter this some in the end, but all forecasting agencies are clearly on the seasonal path shown in Figure 5.