Row orientation, e.g. the direction of vine rows, i.e. running north to south, or east to west, determines how much sun the grape clusters receive. Abacela plants mostly north/south rows but some varietals like Grenache are east/west oriented to gain more shade. Because mornings in the Umpqua Valley are often overcast the north/south rows are laid out 18-20 degrees to the west of true south achieve equal sun exposure on both sides of the canopy. 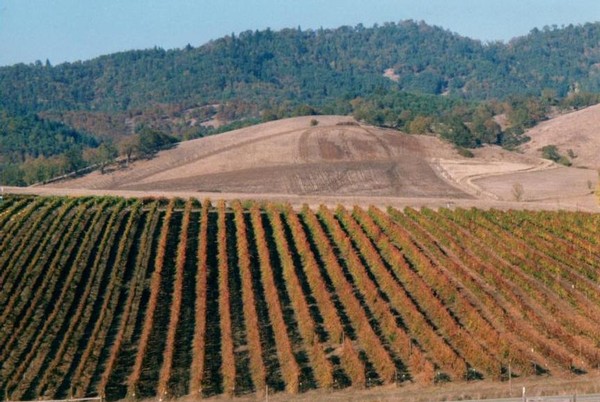 Finding the ideal plant to plant spacing within the row was a matter of experimentation. In 1997 one row of Tempranillo and one of Syrah were planted with spacing between plants that began at six inches, then to 1 foot, then 2 feet etc until the between plant distance reached ten feet. This trial is now in its 23rd year of teaching Abacelians and viticulturists from around the world about vine spacing.  The trial suggests plant to plant spacing should be between 3 to 5 feet and all new plantings at Fault Line Vineyards are adjusted between 3 and 5 feet, based on variety, site characteristics and rootstock considerations.

Abacela has tried four trellis types, including bush (goblet) vines which identify vertical shoot positioning as the best choice. Vines are trained using both cane and spur pruning based on years of experience with the varieties.
Human factors also influence vineyard design. Narrow tractors would be at risk of tipping over on Abacela's steep hillsides, so rows are planted ten feet apart to allow for bigger, safer tractors.
Menu