Most are aware that the Umpqua Valley was created by confluence of three major geological terranes, Klamath Mountains, Oregon Coastal Range, and Cascade Mountains; indeed, peaks of the three mountain ranges can be seen from Abacela. But what the Joneses didn't know about local geology would soon not only surprise them . . . but bring good luck!

Under the surface of the idyllic oak savannah not everything was equal. The first clue was found in preparing vineyard blocks to the north the soil turned out to be jam packed with round rocks which was in sharp contrast to the boulder laden loams to the south. The “cobble” ranged from golf to volleyball in size. These soils were extremely different, and it wasn’t long until one could map their interface along an east west line across the property. They speculated that an old river had deposited the cobble and pressed on. 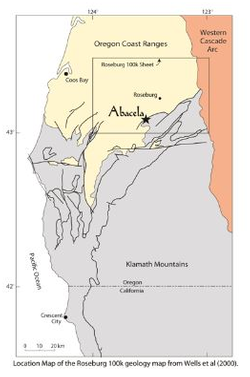 In 2000 they planted the steep hillside and naming it “Cobblestone Hill” the U.S. GEOLOGICAL SURVEY report was published in 2001 entitled “Geologic Map and Database of the Roseburg 30 x 60' Quadrangle, Douglas and Coos Counties, Oregon” By R E Wells et al https://pubs.usgs.gov/of/2000/0376/. This 60-page report and maps clarified what the Joneses had stumbled upon. It was the missing suture that ties the Klamath Mountain terrane to the Oregon Coastal Range. It was a thrust type fault with the Klamath terrane overriding the Oregon coastal range and Roseburg volcanics.

The location of the fault had been suspected by geologist in the 1800s, but it was Wells group who described and named it the Wildlife Safari Fault from its discovery in a gravel pit on their property next door to Abacela. The figure to the left shows Abacela’s location on the fault.

The report documents that millions of years ago the ancient north thrusting Klamath Terrane collided with and overrode the youthful Oregon Coastal Terrane which at that time was covered by ocean waters. Subsequently, probably in the late Eocene era the submerged Oregon Coastal terrane was uplift by a huge submarine basaltic flow called the Roseburg Volcanics. The timing of Wells publication was very helpful to Abacela in that it clarified the puzzle of two well demarcated soil types on their property.

The fault line runs east-west bisecting the vineyards into two distinct geological provinces. To the south lies the Klamath derived soils that are littered with exotic boulders of serpentine, quartz, jasper, blue schist, sandstone and conglomerate some of which are huge, meaning the size of a jeep. Several hundred boulders were removed from the vineyard and used in building the winery parking lot. Below is a cut piece of Jasper removed from a boulder in Cox’s Rock Vineyard showing an array of minerals including substantial gold ore. 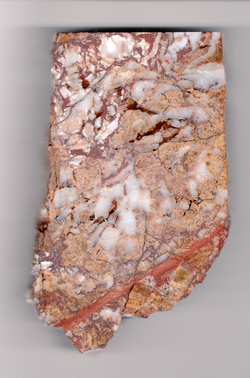 Practically all the quartz and jasper contain gold. These loam to sandy loam soils were derived from ancient Cretaceous to Jurassic bedrock (250 to 400 million years old). In sharp contrast, a few feet across the fault line to the north the Oregon Coastal terrane which contains only cobble and other sea floor sediments that that were elevated in recent geological time by submarine volcanics. Some of the material from both terranes are coated with lava.

Most geologists visiting Abacela have speculated that the steep south facing cobbled hills were uplifted in the last 20 million years. Some think the basalt flows did not completely end until double digit thousand years ago, perhaps just before Mount Mazama erupted to form Crater Lake. Thus, the exact geological age and the phenomenology that created and juxtaposed these soils are not perfectly understood. Nevertheless, it is truly remarkable to consider that the bedrock that formed these juxtaposed soils differs in age by at least 250,000,000 years.

A cross section of this geological interface was prepared by Wells and his group and is shown below. The cross section passes through the Wildlife Safari Fault roughly 1,500 ft east of Fault Line Vineyards. This is an insignificant distance thus we have located Abacela to scale on the drawing using a red line under the name. The cross section really helps one understand the dynamics of a thrust type fault. 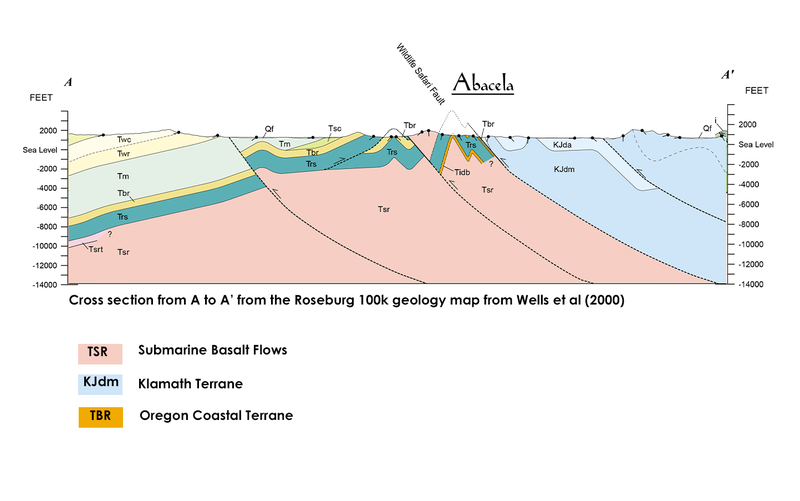 The blue material represents the north thrusting Klamath terrane. The pink material labeled Tsr in the cross section represents the submarine basalt deposits that lifted the sea floor sediments (Tbr) to the surface where they became exposed forming Cobblestone and Grand Hill.

But not all the entire length of fault line is obvious; roughly 2200 feet west near the gate to Chaotic Ridge Vineyard the fault line is not apparent; Wells group used the term “occluded” to describe such segments where the fault cannot be precisely located by surface inspection. But just to the west of the Abacela property the fault line is once again visible to the casual observer and this demarcation extends in a jagged line from the cascades to the Oregon coast.

With this new understanding the Joneses named their property Fault Line Vineyards and in mapping out its different parcels and vineyard blocks five distinct soil types were identified meaning it complicated farming but enabled experimentation.