By the time climate researcher Greg Jones issues his next Weather and Climate Summary and Forecast near Labor Day, harvest for sparkling wine in the Pacific Northwest will have begun.

That doesn’t include the estate plantings for Abacela Winery, where Jones recently took over as chief executive officer, but the Albariño at his family’s iconic Fault Line Vineyards in Oregon’s Umpqua Valley American Viticultural Area won’t be far off.

“The overall summer forecast continues to tilt the odds to warmer than average temperatures and remaining seasonally dry for the western U.S.,” Jones reported the day after the annual Albariño Days celebration at Abacela while continuing to work on his ClimateOfWine.com.

Vineyard managers and winemakers have the experience, knowledge and resources to deal with the grapes ripening under those temperatures. However, the domino effect surrounding the drought can bring irrigation problems for some and another season of smoke from wildfires. 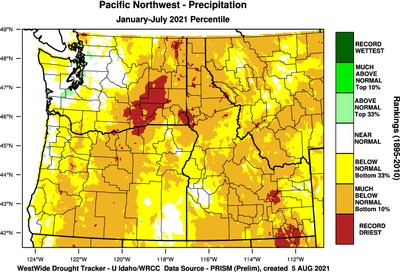 “Sorry for the broken record, but the western U.S. continues to be dominated by drought conditions,” he wrote. “Currently over 99% of the west is in some level of drought. The highest drought categories, extreme and exceptional, now make up roughly 65% of the western U.S.”

And there’s no expectation that it will change until the start of fall.

“Both short- and long-term drought indicators along with the seasonal outlook point to the western U.S. being highly likely to continue dry conditions into the start of the fall,” Jones noted.

His latest overview of growing degree days, drought reports and weather forecasts indicates that the 2021 vintage in the Pacific Northwest is leaning more toward the historically hot 2015 growing season than last year. It’s a different story throughout much of California wine country because of the influence of marine layers.

“Most inland areas continue running 5-20 days ahead of normal growing degree-day accumulations, while the coastal zones in central to southern California are near average to seven days behind,” Jones wrote.

Another factor for Northwest vineyards is that wine grape vines will shut down as a result of heat stress, so during the recent “heat dome” episode, those lofty temperatures added to the GDD totals but did not necessarily help with ripening. In a number of varieties, shut down begins around 95 degrees, but that does not apply to all grapes.

For the record, in 2015 the Jones family began bringing in its award-winning Albariño on Sept. 14. That heat didn’t stop winemaker Andrew Wenzl’s Albariño from earning a gold medal — and better — at four West Coast competitions the following year. Last year, harvest for the white grape native to Galicia commenced Sept. 29 at Fault Line Vineyards.