Who says you can’t go home again? Abacela winery in Roseburg has named former Linfield University director of wine studies Gregory V. Jones as its new CEO. Abacela’s owners, who also happen to be Jones’ parents, are pleased as punch.

Hilda and Earl Jones sit on Abacela’s Board of Directors with their five children; Hanna, Meredith, Gregory, Laronda and Tamara. At a recent board meeting, they appointed Gregory as Abacela’s new CEO.

Hilda and I, as well as Greg’s sisters, are really happy that Greg is becoming CEO of Abacela. It has been a 30-year labor of love, and to see our legacy pass to the second generation is very satisfying,” Earl Jones said in an email.

Gregory Jones, an world-renowned expert on the relationships between climate and viticulture, recently resigned as director of the Evenstad Center for Wine Education at Linfield University in McMinnville.

“I’m proud of what I accomplished, but it was time to move on. This will be the first fall since 1990 where I haven’t been in a classroom, either as a student or a teacher,” Jones said.

In the same way pinot noir’s potential lured David Lett to the Willamette Valley, the Joneses moved to the Umpqua Valley to champion the tempranillo grape. The Jones family planted 12 acres of vines, including Oregon’s first tempranillo, on their 463-acre property in 1995. The Abacela estate now includes 76 acres planted to tempranillo, albariño, syrah, malbec and 11 other grape varieties.

Starting Aug. 1, Gregory Jones will take charge of Abacela while his parents lead a wine cruise to Portugal. Earl Jones will return to manage the vineyard through harvest with assistant viticulturist Justin Archibald. “This vintage is my responsibility, and it wouldn’t be wise to walk away. Greg’s in charge, and I’ll fade away to retirement,” Jones said.

Gregory Jones said his first priority is meeting with Abacela’s employees. “This may seem odd, but I need to meet and get to know every employee so they can train me. If you are going to be governor of the state, you’d better visit all 36 counties,” Jones said. 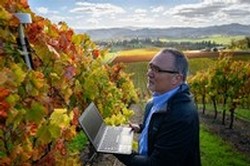 Jones is looking forward to getting his boots dirty in Abacela’s vineyards. “You know a vineyard by being there, and that’s what I need to. I helped map the vineyards, and I’ve worked them, but I don’t know as much about the plants as dad does. I need to learn how to think about the vineyard the way my dad has all these years, Jones said.

Soon, Jones will have more plants to think about, some new, some very old. The new plants will take root in a 10-20 acre area of open landscape that Jones describes as well-suited to planting new vines. The old plant involves a detective story.

Several years back, Earl Jones discovered a series of thick, gnarled grapevines hidden by blackberry bushes in an old orchard on his property. He believes the orchard and vineyard were planted by the family of homesteaders James and Elizabeth Cox at some point between 1849 and 1871.

When Jones had one of the vines tested, it turned out to be listan prieto, a Spanish native known in 1800s California as the Mission grape. The best guess is a settler, priest, or nurseryman brought the vine cuttings up from the vineyards of one of California’s Spanish missions.

Gregory Jones is excited to announce that this fall, they may finally be able to harvest enough listan prieto grapes to make one barrel of wine. Perhaps visitors to Abacela will one day be able to sip this bit of history under the new pavilion Jones plans to build near the Cox homestead site.

Another resurrection project involves the orchard itself. Jones will be working with a local horticulture group to use genetic material from the old pear and apple trees to try and bring the orchard back to life.

Does Jones plan to continue to find time for academic work? “I will finish up what’s on my plate in terms of sitting on Ph.D. and the like. I will continue to work on research projects I contribute to in Italy and Portugal. What I learn from top viticulturists in other parts of the world will always help me here at Abacela,” Jones said.

Jones will also keep up his famed monthly climate reports while starting a new blog on Abacela’s website. That’s great news for both Abacela and the wine world.

-- Michael Alberty writes about wine for The Oregonian/OregonLive. He can be reached at malberty0@gmail.com. To read more of his coverage, go to oregonlive.com/wine.